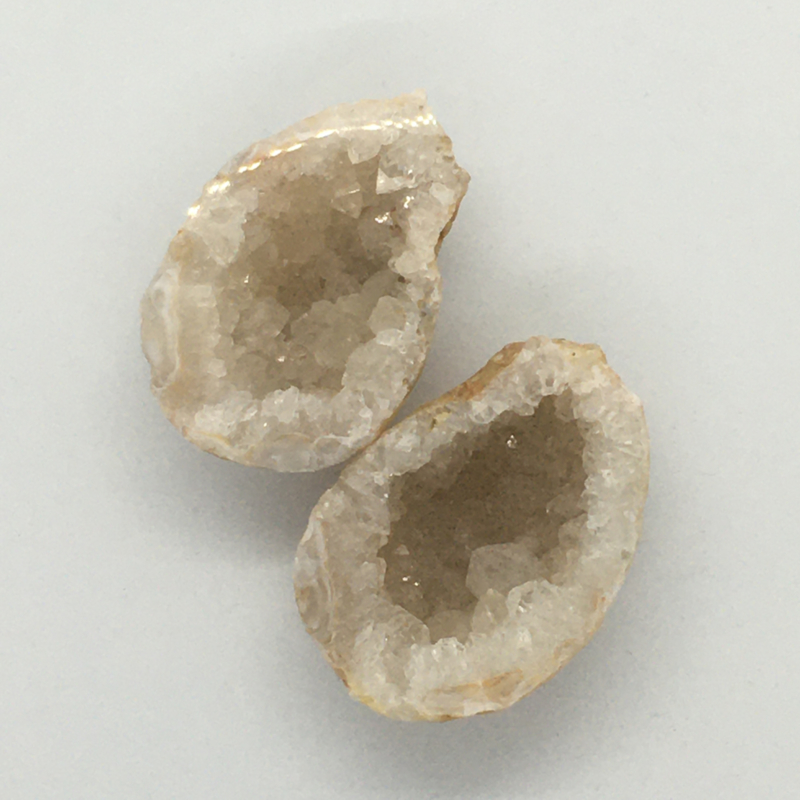 These geodes are made of agate.

Agate is a stone of strength. It was used by the Ancients on the breastplates of armor to give warriors strength and make them victorious in battle. Energetically, it is considered to give strength in both battle and physically.

Agate enhances creativity and strengthens the intellect, making it a beneficial stone for both students and artists. It is also known as a good luck stone. As a stone of harmony, one of the things agate does is balance yin/yang energy. Agate increases energy. However, because it is a grounding stone, it does not increase energy at all times, but rather enables bursts of energy as needed. In this way, agate is a conservation stone,  and enhances longevity.

Agate is a very protective stone. It is especially protective for children, and makes an excellent stone for children's amulets,  medicine bags, jewelry, or just to carry around in a pocket. Agates are said to be especially useful for protecting children from falling.

Emotionally, agate gives courage, emotional strength, self-confidence, and dispels fears. It can also lessen feelings of envy by grounding the emotions. In the same way, it assists with acceptance of all things. It can be very beneficial for self-examination as well as examination of the circumstances one finds oneself in. These qualities make agate superior for easing anxiety and stress.   Plume agates are especially helpful for anxiety and stress relief.  Particularly when placed on the Solar Plexus (3rd) Chakra it can help one to accept one's emotions, thereby helping overcome those emotions that one wants to remove.

Because of the harmonizing qualities of agate, and its emotional energies of removing and releasing resentments and bitterness, it is also considered by many to be an excellent stone for helping to heal and improve relationships.

Agate can cleanse and stabilize the aura by removing and/or transforming negative energy.

As far as relationships go, agate is a stone of marital and romantic fidelity.

Agate is said to strengthen the body and the body's connection to the earth. It also increases energy. Agate is used in crystal healing for healing of all kinds by bringing the elements of the healee into harmony. Physically, agate is said to be particularly helpful with tooth and gum issues, stomach problems, physical endurance, insomnia, detoxification. Note that healing crystal meanings are spiritual supports to healing and are not prescriptions or healthcare information.

Geodes are hollow bubbles in magma. When the outside cools down, water and gasses can get stuck in the bell and as time passes these minerals can become crystals on the inside of the bubble.

What remains is a closed globe that, when openened, has a treasure of crystals inside.

Geodes symbolize rough on the outside, pretty on the inside....not just physicaly but emotionally as well. As such they help you to see the beauty in yourself and others.

They also represent purity and harmony and they have a purifying and harmonising effect on the room or office they are in.

The geode as a symbol of love and friendshop

I always try to sell two halfs of the geodes together. As such they represent two becoming one and are a great gift between lovers and friends, where each has one side of the whole to represent the relationship of friendship.